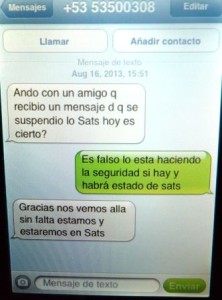 Phone screen: On the way with a friend I got a message that said SATS is suspended today, is that true? / It’s false, State Security sent it; yes there will be Estado de SATS / Thanks, we’re coming there without fail and will be in SATS.

On the afternoon of August 16, State Security deployed an inordinate operation at intersections and around the site of Estado de SATS to stop the public from coming to the screening of the documentary Ai Weiwei Never Sorry, at our usual audiovisual space, Cinema at All Costs.

Earlier, with the complicity of the telephone companies ETECSA And CUBACEL, they blocked the cellphone service of all members of the Estado de SATS working team, and sent false messages announcing the suspension of the event using Antonio G. Rodiles’ cellphone, in a serious act of identity theft, punishable internationally as the crime of fraud.

Despite this, 33 people came, as many others were detained on the way and coerced to return home, some beaten and handcuffed were “freed” later on the highway heading to Pinar del Rio.

Days ago, on August 5, they had mounted a first operation and threatened and intimidated young people leaving Estado de SATS after the first day of a Playback Theater workshop.

The next day, two of these students could not attend as they were arrested, forced to ride in a police car, and abandoned in a distant city.

In recent days there have been similar brutal acts of abuse against activists and Ladies in White in the province of Matanzas. The constant violation of individual rights is routine in Cuba, and the regime aims using violence to silence any dissenting voice.

Over the past year the operations and arrests around Estado de SATS were increasingly violent, reaching its climax with the beating and detention for 19 days of Antonio G. Rodiles last November.

Now, they are starting again.

We are continuing to exercise our liberties. We will sustain our civic work anchored in respect for the human rights contained in the Universal Declaration of Human Rights and the UN Covenants, whose ratification and implementation we are demanding through the Campaign For Another Cuba.

Our commitment in the face of mediocrity and totalitarianism will continue to be creativity and talent.

Our responsibility, a better country

This morning we heard through a friend that on Thursday the workers of the Labiofam company were notified that they would participate, today, in an act of repudiation* in front of the Estado de Sats headquarters.

A few minutes ago we returned from the Fifth Station of the PNR (National Revolutionary Police), located at 7th Avenue and 62nd in
Miramar, where we delivered to the Station Chief, badge number 0037, the following document and warned of the possible consequences of undertaking these acts and provocations.

Chief of the 5th unit of the PNR of Miramar
Street 7th. A and 62, Playa Municipality

Through this communication the undersigned, Antonio E. Gonzalez Rodiles, a resident of 1st Avenue. No. 4606, between 46 and 60,
Miramar, Playa, I appear before you under the provisions of the Constitution in Article 63, “Every citizen has the right to lodge
complaints and petitions to the authorities and to receive appropriate attention in accordance with the law,” to put before you what I relate below:

I thought it appropriate to bring to your attention the violation of the provisions of the Act so that you can fulfill your duty to maintain order and respect for citizens’ rights within the jurisdiction of your competence.