The recent editorial by the newspaper Granma clearly defines the mediocrity and poverty of thought of a system that now howls desperately at its approaching end. The text is an apology to the cynicism of the elite and those who serve it, who try to discredit and silence the independent voices that spring from Cuban society, and so conceal their total debacle. 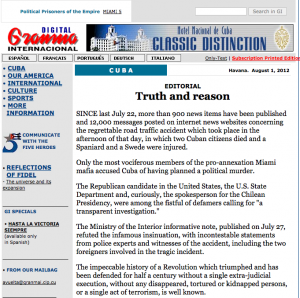 It is outrageous to see that the same government and the same criminal characters who instituted the firing squads and the long sentences in subhuman conditions as a way to maintain the terror, who ordered the repudiation rallies and beatings, attaching the people’s name as the author of these abominable acts, try to present themselves before Cuba and the world as paradigms of honesty and virtue.

The country lies in ruins and they don’t care, they display not the slightest dignity. They want to stay until the last moment, at any price, even provoking civil violence, seeing their allies as mere objects for their use. Fidel Castro did it at the Moncada Barracks attack when he supposedly lost  his way in Santiago de Cuba, a city he knew very well, while other assailants fought and were killed. Raúl Castro did the same thing at the battle of Marcos Sánchez, in that now distant 1958, when cowardly and shamefully he fled, leaving behind all his troops.

These two characters keep the country in ruins. A constantly rising number of Cubans are literally crushed to death in the collapses of their disastrous homes, while Castro descendants assume the right to continue to plunder the nation of its funds, without rendering an account to anyone. 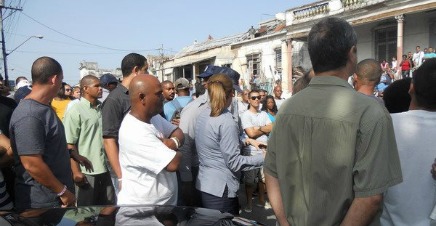 They and their sidekicks claim that we Cubans destroy each other like mad dogs, trying to sell ever more dearly the disaster they have provoked in our nation, they are insatiable, they are beings who profess an utter contempt for humanity, tolerance, humility, for our land.

Those who launched a rabid mob to beat people on the morning of July 24 during the funeral of opposition leader Oswaldo Payá, are the same ones who will give the order to shoot into a defenseless crowd, the same who prefer to drown thousands and thousands in a bottomless sea, rather than accept their ignorance and decay.

Hopefully the peons who form a part of and who cooperate with this nefarious machinery will begin to understand, for the good of all, that there is no action without consequence and that the winds are beginning to blow in favor of the truth.